Democracy, made in Iran 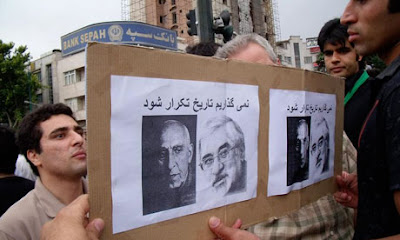 By reviving memories of an ousted leader, Iran's protesters are signaling they want to win reform without US intervention

Despite efforts by Iran's leaders to keep photographers off the streets during post-election protests this month, many vivid images have emerged. The one posted here, above, is the one I found most chilling, poignant and evocative.

By now, many outsiders can identify the man whose picture is on the right-hand side of this protest sign. He is Mir Hossein Mousavi, the reported loser in this month's presidential election. The elderly gentleman in the other picture is unfamiliar to most non-Iranians. He and his fate, however, lie at the historical root of the protests now shaking Iran.

The picture shows a pensive, sad-looking man with what one of his contemporaries called "droopy basset-hound eyes and high patrician forehead". He does not look like a man whose fate would continue to influence the world decades after his death. But this was Muhammad Mossadeq, the most fervent advocate of democracy ever to emerge in his ancient land.

Above the twinned pictures of Mossadeq and Mousavi on this protest poster are the words "We won't let history repeat itself." Centuries of intervention, humiliation and subjugation at the hand of foreign powers have decisively shaped Iran's collective psyche. The most famous victim of this intervention – and also the most vivid symbol of Iran's long struggle for democracy – is Mossadeq. Whenever Iranians assert their desire to shape their own fate, his image appears.

Iranians began their painful and bloody march toward democracy with the constitutional revolution of 1906. Only after the second world war did they finally manage to consolidate a freely elected government. Mossadeq was prime minister, and became hugely popular for taking up the great cause of the day, nationalisation of Iran's oil industry. That outraged the British, who had "bought" the exclusive right to exploit Iranian oil from a corrupt Shah, and the Americans, who feared that allowing nationalization in Iran would encourage leftists around the world.

In the summer of 1953 the CIA sent the intrepid agent Kermit Roosevelt – grandson of President Theodore Roosevelt, who believed Americans should "walk softly and carry a big stick" – to Tehran with orders to overthrow Mossadeq. He accomplished it in just three weeks. It was a vivid example of how easy it is for a rich and powerful country to throw a poor and weak one into chaos.

With this covert operation, the world's proudest democracy put an end to democratic rule in Iran. Mohammad Reza Shah Pahlavi returned to the Peacock Throne and ruled with increasing repression for a quarter-century. His repression produced the explosion of 1979 that brought reactionary mullahs to power. Theirs is the regime that rules Iran today.

Carrying a picture of Mossadeq today means two things: "We want democracy" and "No foreign intervention". These demands fit together in the minds of most Iranians. Desperate as they are for the political freedom their parents and grandparents enjoyed in the early 1950s, they have no illusion that foreigners can bring it to them. In fact, foreign intervention has brought them nothing but misery.

The US sowed the seeds of repression in Iran by deposing Mossadeq in 1953, and then helped bathe Iran in blood by giving Saddam Hussein generous military aid during the Iran-Iraq war of the 1980s. Militants in Washington who now want the US to intervene on behalf of Iranian protesters either are unaware of this history or delude themselves into thinking that Iranians have forgotten it. Some of them, in fact, are the same people who were demanding just last year that the US bomb Iran – an act which would have killed many of the brave young protesters they now hold up as heroes.

America's moral authority in Iran is all but non-existent. To the idea that the US should jump into the Tehran fray and help bring democracy to Iran, many Iranians would roll their eyes and say: "We had a democracy here until you came in and crushed it!"

President Barack Obama seems to grasp this reality. During his recent speech in Cairo, without mentioning Mossadeq by name, he conceded that "in the middle of the cold war, the United States played a role in the overthrow of a democratically elected Iranian government." Then, after the current electoral protests broke out, he avoided the hypocrisy of righteous indignation and confined himself to saying that "ultimately the election is for the Iranians to decide."

Anyone doubting the wisdom of those words should pay attention to the sprouting of Mossadeq pictures during protests in Iran. They mean: "Americans, your interventions have brought us tyranny and death. Stay home, keep your hands off and leave our country to us for a change." 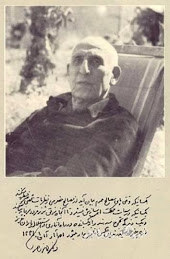